Burton Cummings / CLUBHOUSE / ALL ABOUT MUSIC

(The following was written in Victoria B.C. in mid 1996 and originally posted shortly thereafter.) 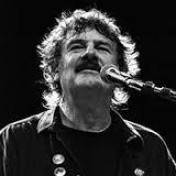